Jean-François Millet was a French artist in the 19th century. One of his iconic works which Irish family’s can relate to is his painting the Angelus.Prints of this painting can still be found in a lot of Irish country homes. The painting is of two people giving thanks for the harvested potato crop, A subject close to a lot of Irish peoples hearts. The painting is regarded as a Christian image amazingly painted by a man whose  second marriage was a civil ceremony and not recognised by the church. 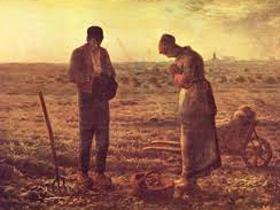 October for many is a month for celebrating Halloween but for Potato growers it is the month for harvesting the years crop. I have always wanted to recreate this image so I asked some local growers could I go to their garden to set up this shot. Mother and son ,Annie and Willy, Joy to this day dig their potato garden mostly with a spade. Thirty to forty drills of potato’s of about a half mile long would put most people off this labour intensive work, but each year mother and son go about this task as if it were nothing but just day to day work. Willy who is fast approaching sixty is nearly as quick as a potato digging machine, the difference being he can work in all weather conditions. Annie is a 77 year old woman who would pick potatoes as good as anyone in their prime. Willy and Annie are probably the last of a generation who work in the old traditional way. My task of recreating a scene from the 1800’s was made all the more easier as things in this garden haven’t changed a lot in 200 years, the rough time in history when the original painting was created.

1/ a two pronged pitch fork instead of a three pronged fork,

2/ A wheelbarrow instead of a wooden cart,

3/ A bucket instead of a basket,

4/potato’s strewn around the foreground,which were plentiful in the garden this year.

models Annie and Willy in Character

Annie and Willy were working all morning digging, grading and bagging their crop, At mid day they took a break for some tea. While they dined sitting on bags of “spuds” pouring tea from a flask and eating sandwiches and buns from a lunchbox, I set up the shot, I then informed them that they were my models.They were given no time to tidy themselves up as I wanted as much authenticity as possible, They both had the  look of work about them which was ideal. When the models and props were in place,The important thing as far as I was concerned ,when taking the photo was the position of the horizon line, which was just under the shoulder of the man on the left. I gave Willy a bag to hold in his hands instead of a hat. I chose an aperture of F8 as the background didn’t need to be totally blurred out, and aperture f8 which is the perfect aperture when photographing portraits. ISO was set to 200, which is perfect for outdoor shots where their is plenty of ambient light/daylight .I used the manual mode which I find, is the mode where you can control all aspects of the cameras functionality and get the sharper image. I took my time directing my two models , I reviewed the scene carefully before I took the shot and the result was ,I took one photo ,reviewed it and was very happy. My models returned to work, after I showed them the image which fascinated them.

Photographic Software has become very advanced and in the Digital age most images are put through some sort of software as you can  change an image in so many ways to give the image a uniqueness ,the result being as close as possible to what you  had anticipated when setting out. For me the big issue with the image from the camera ,was grey featureless glary sky ,which is so common in Ireland. A polarising filter which can be placed on the lens helps with this problem but another tool which works is Photoshop. In  photo shop I took the sky from the painting “The Angelus” and blended it into the photo using the layers pallet and reducing the opacity of the new layer. I created a new HDR layer and again reduced the opacity in order to increase the textures of the image while keeping the image as unHDR as possible. Finally I reduced the saturation of the colours which were too strong.

The end product has a timeless feel to it, it looks an old, modern image. Opportunity’s to take photos like this one are a rarity and I am so delighted with the outcome, that I have included it in my first collection of images for sale. Twenty five signed prints of this image are available in the 20 x 16 size, to purchase, and when they are gone they are gone as “Harvey Norman” says, so don’t delay in ordering your copy.

This image can be purchased in the Joe Diggins Photography shop for a limited time http://joedigginsphotography.com/store/#!/Garden-Prayers/p/56849693/category=15346761 . Many thanks to Annie and Willy for their kind permission to make this recreation possible, wishing them many more years continued success in their timeless Potato garden.