A couple of weeks ago I was fortunate to take a boat over to The Skellig rock, fortunate because the boats only go out if their isn’t a swell in the sea.

Before I began my journey I did some research to plan my photo-shoot, and I came across a wonderful story which deserves to be shared. 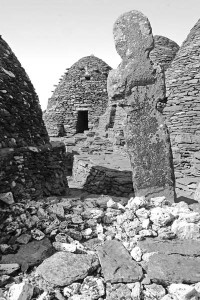 The High cross with the marble stones at its base

The story which follows comes from a book called “Blasket Spirit” a fantastically well written book about a visitor to the Blasket island seeking inner peace after a bereavement in her life. Anita Fenelly retells an experience she once had while visiting the Skellig rock in 1989

There are 600 steps to the monastic settlement at the top of Skellig Michael and it is difficult and extremely dangerous to climb this stone staircase carved out of the cliff face by some monks back in the 5th century. Anita was counting the steps as she climbed “200…201…202” in front of her was an elderly couple who were seriously struggling to make their aged and aching limbs carry them up the 600 steps. The elderly lady said to the elderly man “We will turn back this is too much for us” The elderly man turned to his overweight elderly sister saying” You go back I am continuing on” The mans sister then started giving out ” You are one stubborn man, you wont be happy until you go over the cliff.” The elderly lady turned back and made her way down the steps.

The elderly man named Paud continued up the steps and after about five more steps placed his hands on his knees trying to catch his breath. Anita caught up to him and said” You have done marvellously and you should listen to your body and turn back, I will take a photo at the top to show you what it is like”. Paud would have none of it and continued another five steps ,still not even half way up the steps, he was again struggling for breath.” I cant do it” he said ,”I have failed my dearly beloved” he said with tears in his eyes. Anita asked Paud what he had wished to do and he told her the story of his wedding stone.

A stairway to heaven

Paud and his wife were married in 1945 in Ventry and honeymooned in Waterville. At that time there were no tourists going to the Skellig rock but Paud’s cousin had a boat and one fine day brought the newlyweds into the Skellig . The couple had the island to themselves and enjoyed the views and the peacefulness as they spent the whole day taking it all in. While at the top they took a white marble stone from the base of the high cross, Paud placed it in his pocket and they both vowed to one day return.

Paud  had a great marriage with his beloved, being blessed with three sons, but in their busy lives raring their family they never returned, the stone in the meantime had split in two and his beloved wife had passed away the previous spring. Paud was on a mission to return the stones to the foot of the high cross. Anita said to Paud that she would return the stones, and she would take a photo of the stones replaced back where once they came. Paud placed the stones in a handkerchief and gave them to Anita, He placed his hand on her shoulder unable to speak, tears welling in his eyes as his emotions overpowered him. He turned and made hi way down the steps. In 1989 construction works were being carried out on the Skellig and restrictions were in place on visitors at the top where the high cross was. To make a long story short it didn’t look like Anita would get to place the stones under the cross but with much bravery and escaping the attention of not so nice security guards she returned the stones and said a quick prayer for Paud and his wife. With all the activity at the top and long delays getting up to the monastic settlement, Anita never got to meet Paud as his boat had left before she returned to the pier.

When I reached Skellig Micheal I climbed the 600 steps taking a couple of little breaks along the way as it is physically tough but I took my time and got there. I went to the High cross and did a visual search (while saying a prayer for the newlyweds of 1954),for a stone split into two, a long time has passed since 1989 and I am guessing the stones have parted, they are still there somewhere but which stones are Pauds wedding stones no one will ever know. I was captivated by this story and it made my visit to the Skellig very spiritual which is what the place is all about. The following is a link to a short film of the day.  Skellig rock short film