Communion season is coming to an end and one of the many highlights was taking this photo. This was inspired by a Phillippe Halsman  series of photos called “jump” where he got celebrities of the time to jump and he took the photo.” When a person jumps he lets all his inhibitions go” 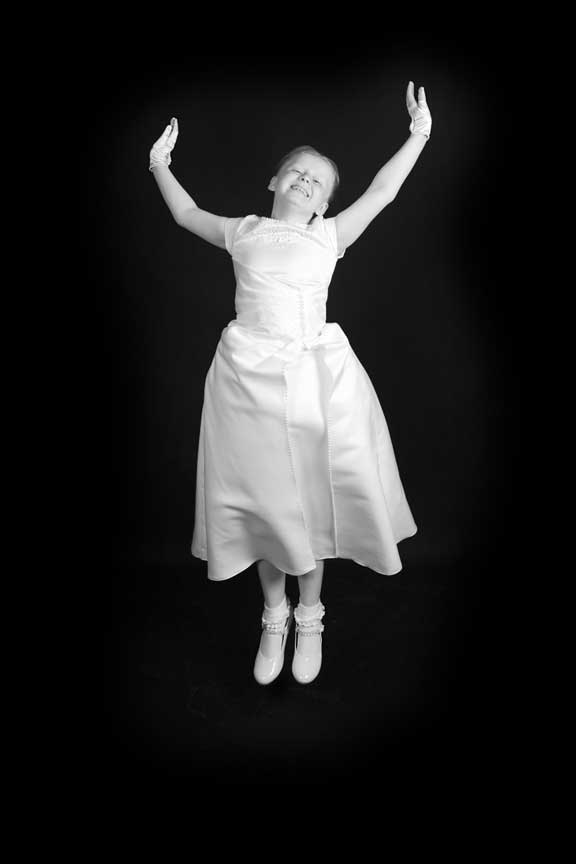 Born into a Jewish family in Riga Latvia in 1906 he took an interest in photography playing with his fathers camera .In 1928 on a skiing tour in Austria misfortune came his way when his father was killed accidentally. Halsman was given a four year sentence for his role in the incident but was released in 1931 with the help of Albert Einstein. After this Halsman went to France, he contributed photos to vogue magazine. Soon his reputation as a portrait photographer took off.  In portraiture he used a style of sharp dark images which was in contrast to the soft focus images of the time.

When war broke out in 1939 he got an American visa with the help once more of Albert Einstein. He worked for Elizabeth Arden who used his photo of a model with bright red lipstick in front of the American flag, to sell her products. This led to an association with life magazine where he contributed photos for thirty years. In 1941 Halsman met Salvador Dali. They worked together to produce a book called “Dali’s moustache” a book with 36 views of Dali’s moustache. Inevitably in 1947 Halsman took some portraits of Albert Einstein the man who helped him so much in life. During these sessions Einstein admitted to having regrets about his role in the development of the atomic bomb. The portrait of Albert Einstein became the cover of life magazine for the person of the century issue and also became the image of a tribute stamp for Albert Einstein. In 1951 Halsman was commissioned by NBC for portraits of its stars, this is where he began his “jump” collection asking the stars to jump for the portrait. This collection included personalities such as Groucho Marx, Bob Hope, and famously the duke and duchess of York. When asked about the jump series of photos Halsman said “When you ask a person to jump, his attention is directed to the act of jumping and the mask falls so that the real person appears” the “jump” book was published in 1959.

In 1958 Halsman was listed in “popular photography” magazine as one of the world’s ten greatest photographers. Halsman said on receiving a lifetime achievement award in photography “Every face I see seems to hide and sometimes, fleetingly, to reveal the mystery of another human being……capturing this revelation became the goal and passion of my life.”Halsman died on June 25th 1979.